NOTE: This adventure uses terms and game mechanics created for the Witchcraft: Magic of Hereva supplement. In addition many of the monsters referenced are from Tooth and Nail: Creatures of Hereva. To use this adventure you will need those two supplements.

Quests in Qualicity is a collection of three short adventures compatible with the 5th edition of the SRD of the world’s most popular role-playing game, to be played in an urban setting in a fantasy world inspired by the web comic Pepper&Carrot, created by David Revoy.

Qualicity my favorite city among those shown in the web comic, I love its industrial steam punk style and of course Zombiah is my favorite House of Witchcraft of the six, because it combines my two favorite things in Fantasy Role Playing Games, Undeads and Constructs. Events occur in dungeons in sewers, in tunnels under a side, laboratories, libraries, and so on.

The world of Hereva is a world of magic, inhabited by fantastic creatures and brave adventurers. The world itself is so magical that it doesn’t have a static map, it changes so fast that people need to update their maps every once in a while. In this world, everybody is capable of manifesting magic in small ways, but there are few as proficient in magic as the Witches of Hereva.

Pepper & Carrot is a web comic created by David Revoy, about a young witch called Pepper and her mischievous orange cat Carrot. In the comic, Pepper learns about how to be a witch from her three teachers, who despite not being like teachers in other magic schools, always teach her good lessons in their own way.

In Hereva, magic reaches everywhere, all people can do at least a little magic, even animals and places have magical aspects in them.

You can find the player’s book here: 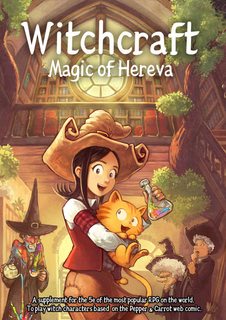 And the monster’s compendium here: 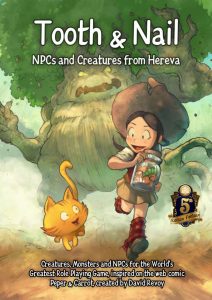