This material was posted on patreon by TL Creator Sampler

We all have someone in our lives who’s sweetly 𝐨𝐛𝐬𝐞𝐬𝐬𝐞𝐝 with Japan and 𝐀𝐬𝐢𝐚𝐧 culture, right?(If that person is you…well, you’re welcome!)
So, if you’re a Japan-lover just like the two of us, you’ve probably already heard about the 𝐍𝐢𝐠𝐡𝐭 𝐏𝐚𝐫𝐚𝐝𝐞 𝐨𝐟 𝐎𝐧𝐞 𝐡𝐮𝐧𝐝𝐫𝐞𝐝 𝐝𝐞𝐦𝐨𝐧𝐬🔥

Tonight, we’ll take you to the hill of Yūreiyama.  On the top of this little mountain, you’ll find a hunted hut inhabited by a Yamauba.

According to Japanese folklore, a yamauba (mountain witch, also called Yama-Uba, Yamamba o Yamanba) is an old woman with nothing but a taste for human flesh.

She’s like that kind of granny that practices black magic, even if there is evidence of not entirely negative or harmful mountain witches,  also described as nurturing creatures. In Western culture, in fact, demons are cruel by definition, no way.  But this isn’t always true talking about Japanese folklore; indeed, some yōkai can be totally benevolent and “caring”.

Talking about our diorama, the standard set is composed of  6 epic yokai creatures in their magical scenery. 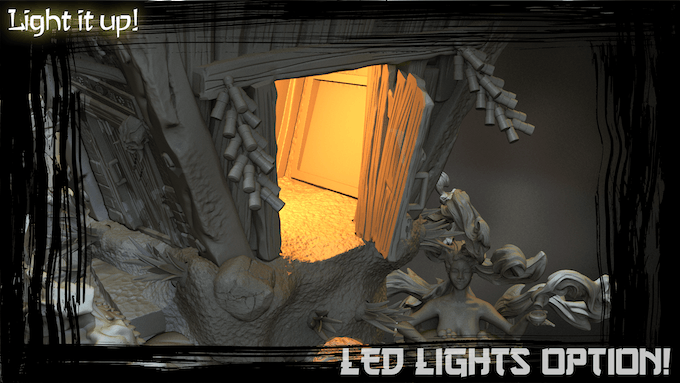 Don’t worry,  no special skills required. We’ll give you some basic tips to create a super cool diorama!:D

For this model, we used our Anycubic Photon Mono X and Elegoo Mars 3D printers, plus Anycubic and Elegoo resin.