Are you running an Underdark adventure and want more versatility to the fungi found there? Are you playing a circle of spores druid and want more fungus themed spells? Are you a DM wanting to create an adventure involving Zuggtmoy by find yourself lamenting the lack of fungal monsters? Or maybe you’re just like me and you love fungi? Well this supplement is for you!

This fully illustrated supplement is the product of a labor of love involving research into both the fungi of the Dungeons and Dragons multiverse and the fungi of the real world, bringing additional insight into the role that fungi play in the Forgotten Realms and beyond, all from the perspective of a friendly svirfneblin ranger!

There is more content planned for this supplement as well, which I intend to release as a free update after the product reaches gold metal status! This content includes over twenty additional spells, dozens of new fungi ripe for harvesting, at least five more subclasses, further details on entities such as Psilofyr and Amesutelob, and more fungal monsters including fey, fiends, undead, and more!

FUNGI:
This section contains full illustrations of every variety of fungi found within the Dungeon Master’s Guide, Out of the Abyss, and The Tomb of Annihilation adventures, elaborated on with additional lore and uses to give DM’s even more tools to work with 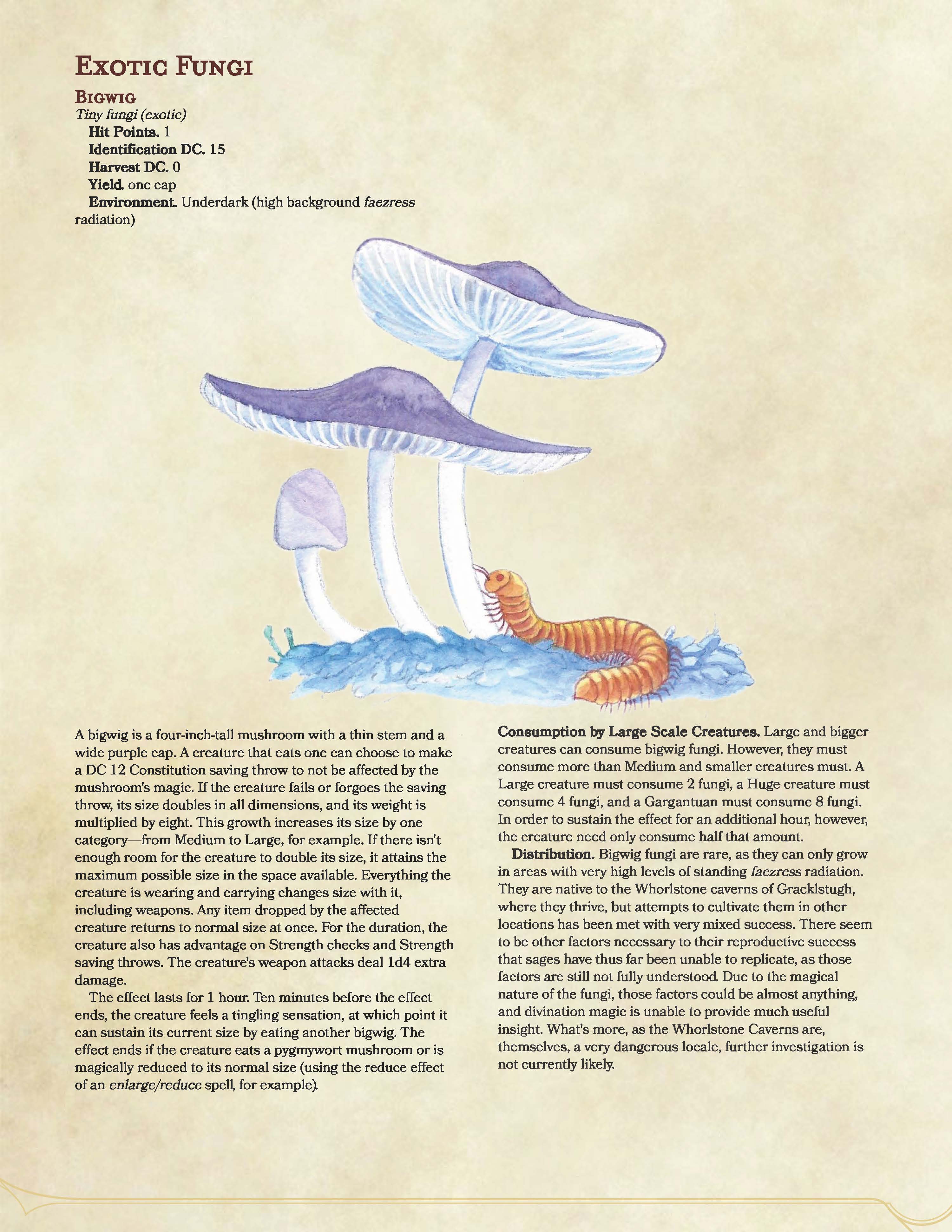 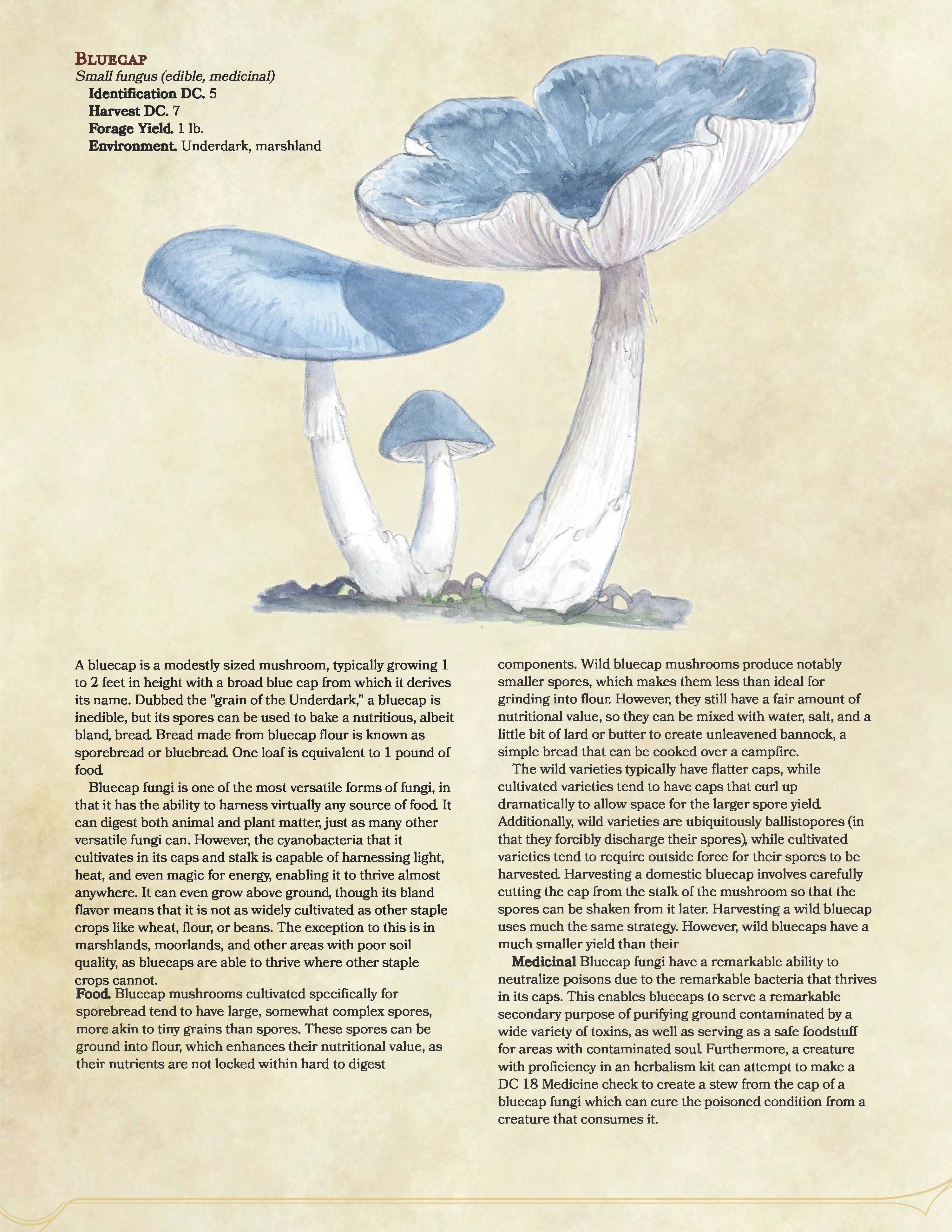 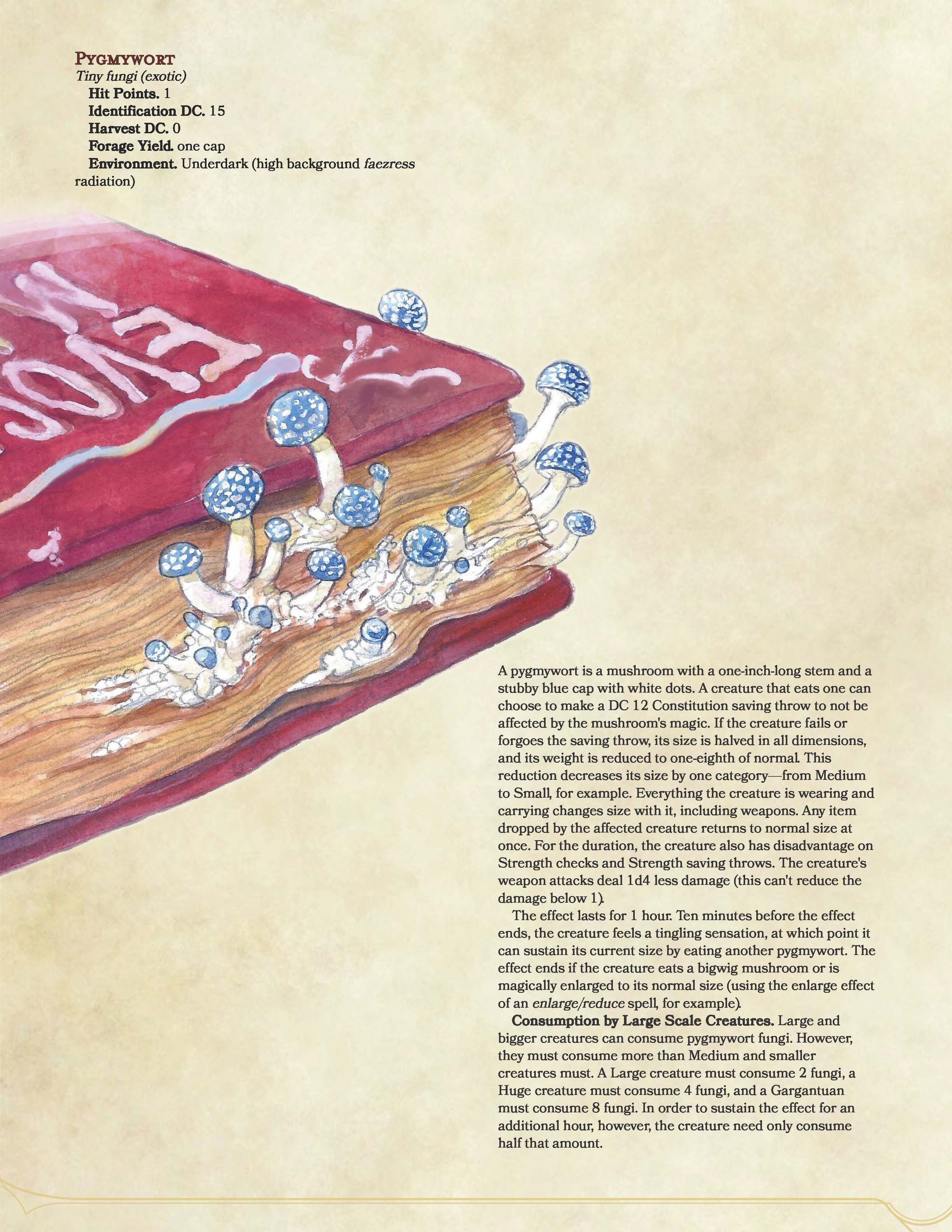 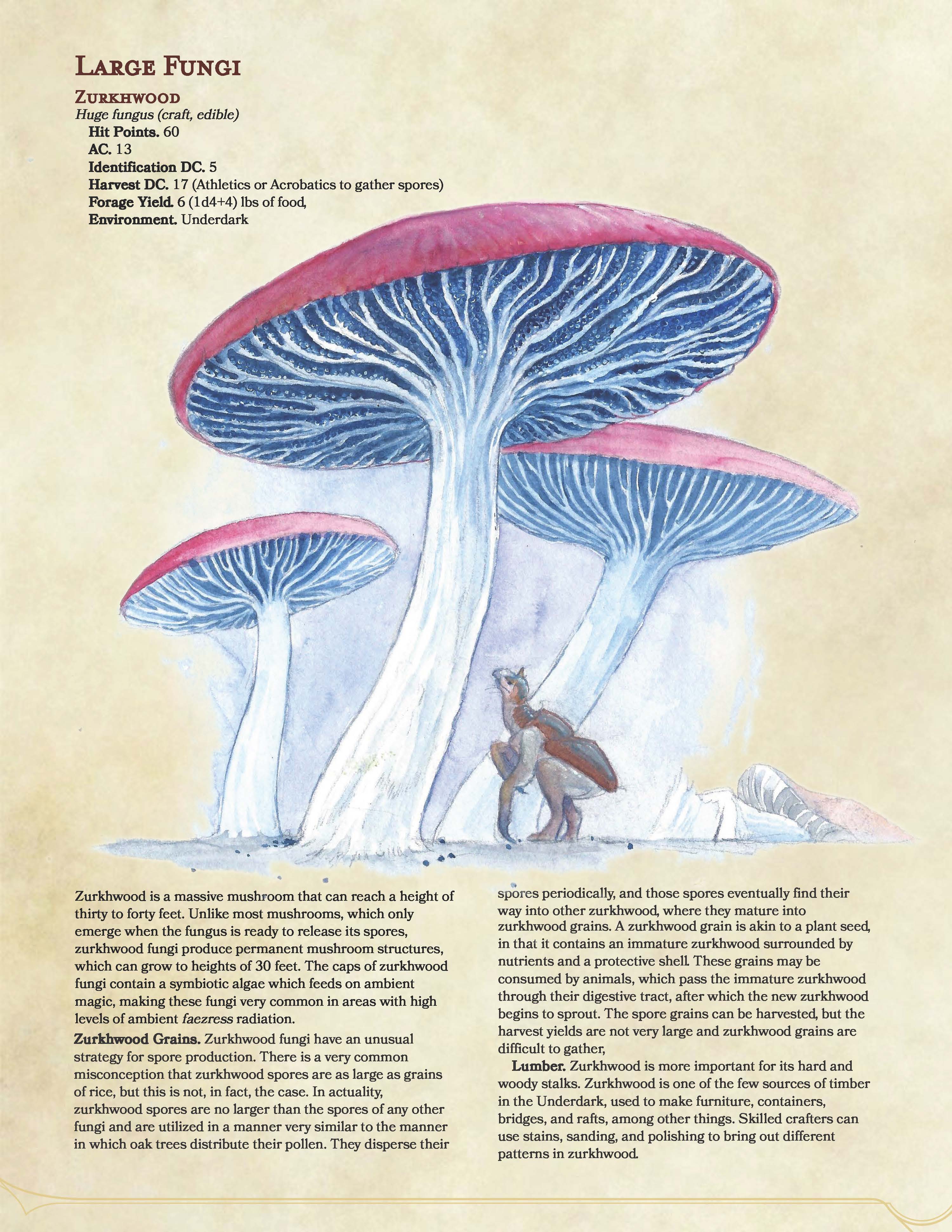 CHARACTER OPTIONS:
This supplement contains new fungal themed options for characters. It details 10 new spells, all of which can be learned by druids, and many of which can be learned by rangers. In addition, it contains a new ranger subclass focused on the relationship between fungi and the rest of nature: the mold strider. Finally, for the warlock of Zuggtmoy or Psilofyr, we present optional fungal spell lists and invocations to give yourself a stronger fungal flavor! 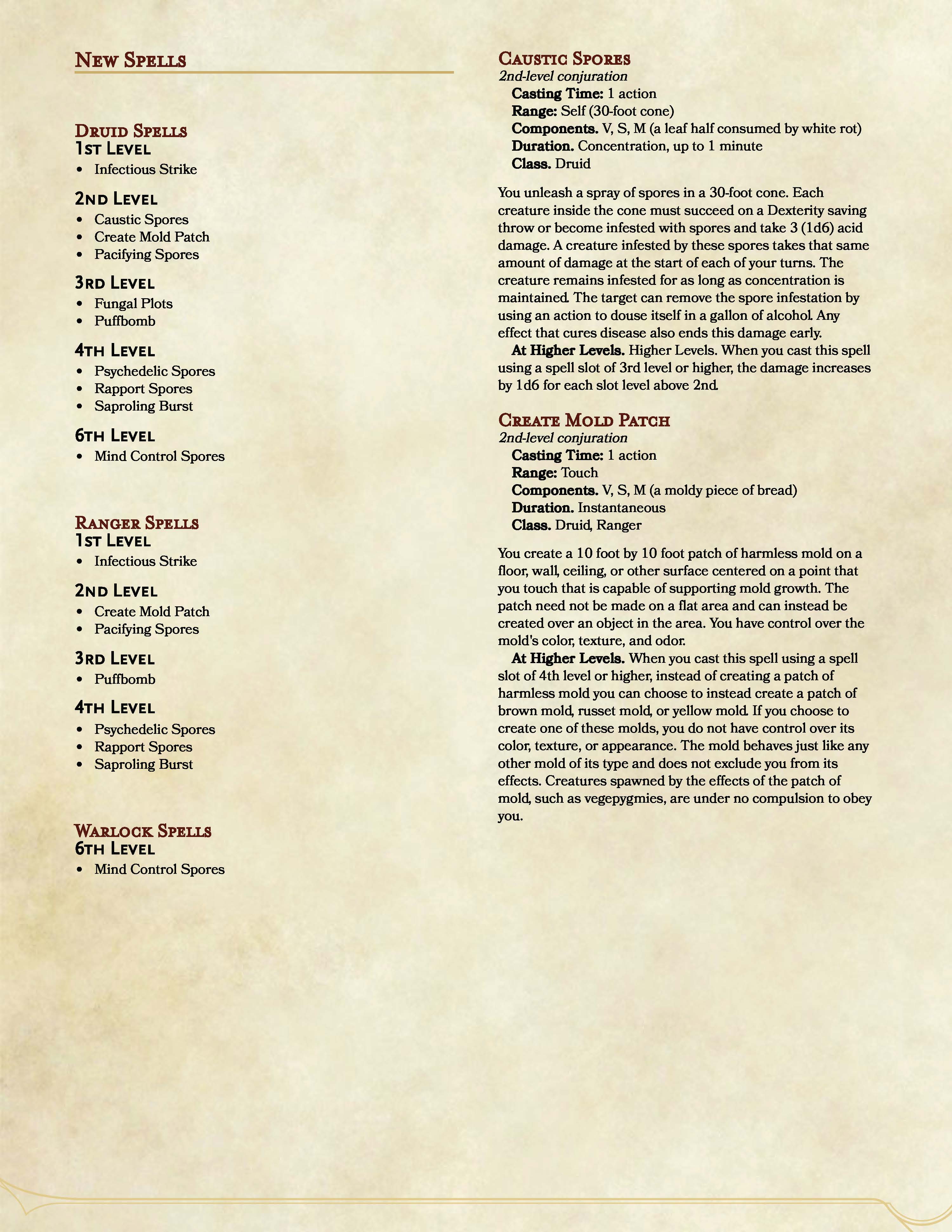 MONSTERS:
This supplement includes statistics for 11 new fungal monsters, with Challenge Ratings ranging from 0 to 20. This includes two new myconids, the vegepygmy witchdoctor, the strange ascomoid, the hallucinogenic basidirond, the titanic mu spore, the deceitful rukarazyll, the versatile saproling, the stealthy sporebats, the unseen phantom fungus, and more. Not only that, 3 statblocks for fungal themed NPCs are presented here, as well: the druid of spores, the fungal warlock, and the mold strider ranger. In addition, familiar fungal creatures are given further addition, such as the culture of the myconids, the biological castes of the vegepygmy, and even tidbits of mythology for the gas spore and the shrieker fungi. 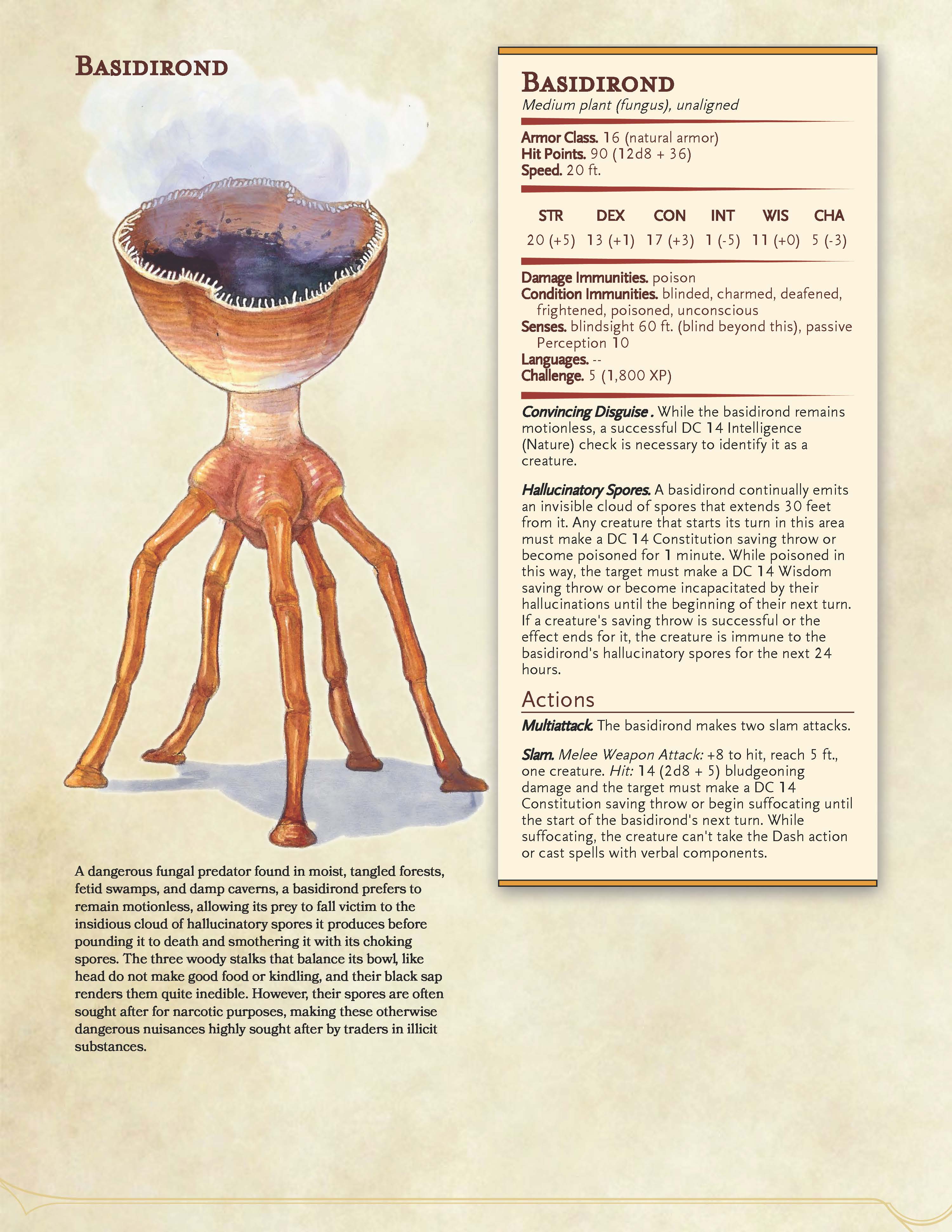 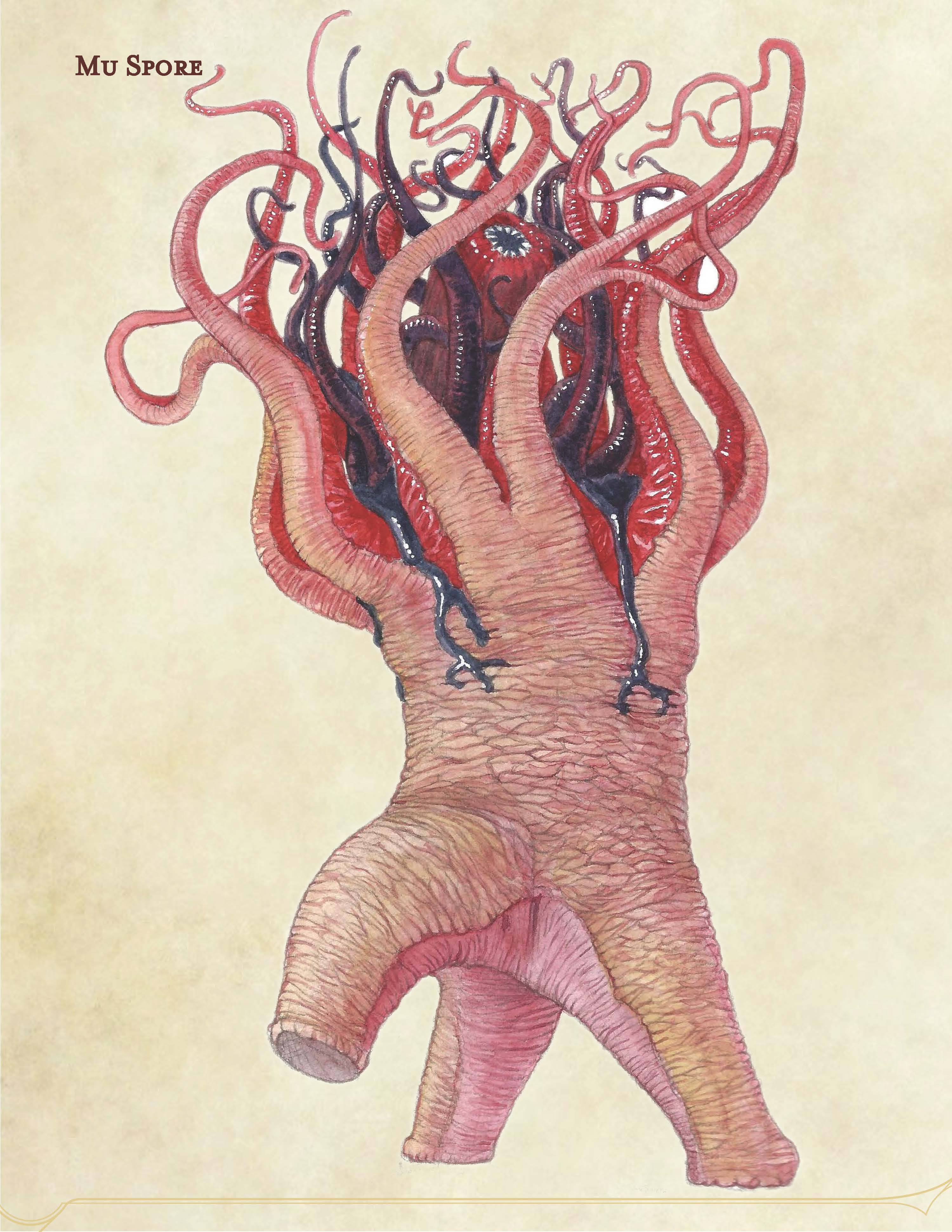 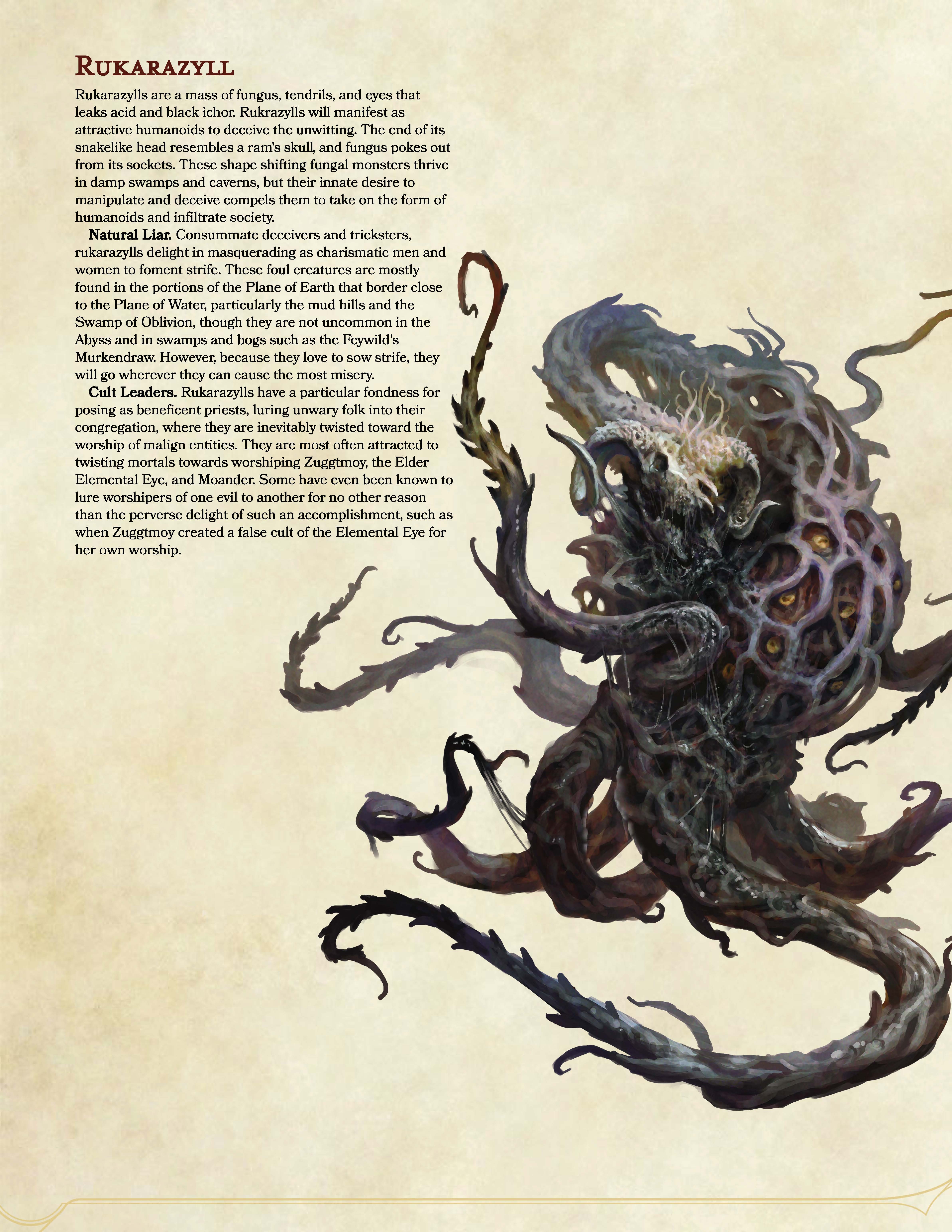 ZUGGTMOY:
No supplement on fungi would be complete without an examination of the Demon Queen of Fungi herself: Zuggtmoy. This supplement provides DM’s with more information on Zuggtmoy, including methods by which demons can be easily given a fungal aesthetic and two powerful servants of hers: Yibyiru, the Rancid Lady of Bitter Bile, who guards Zuggtmoy’s palace and brews poisons that can even kill devils; and Simiel, the Duke of Ecstasy, a demonic spore servant made from the corpse of a dead solar who sees to Zuggtmoy’s interests in the Blood War. 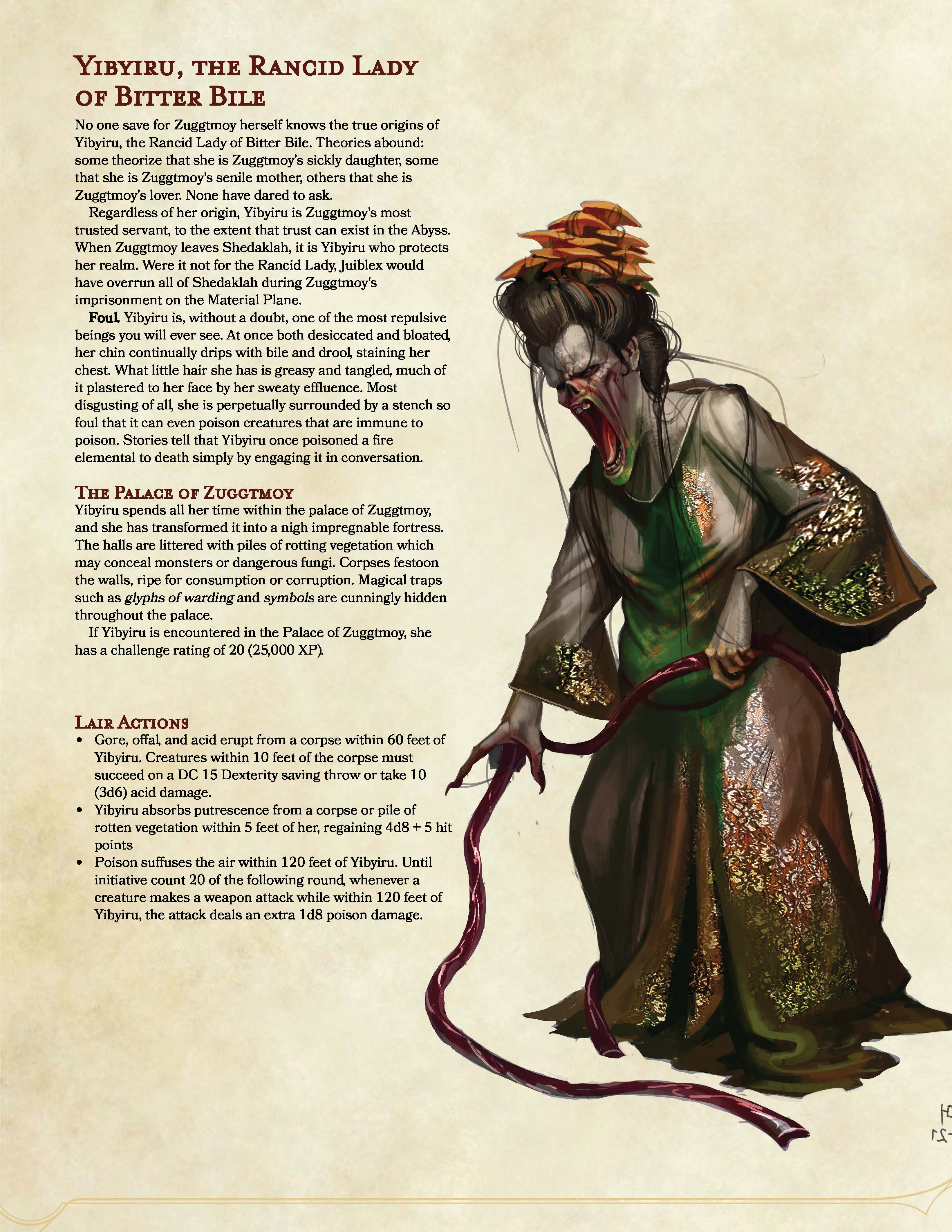