A paladin order ambushes a small group of vampires and takes them to their prison. A prison specifically built to keep vampires in. Staked through the heart in their coffins, do the vampires stand any chance of escape? Especially with notorious vampire hunter, Hector Van Ladengast, the “Vampire Bane” and the “Scourge of the Fang” keeping his watchful eye on them?

Bats Outta Cell: A Vampire Jailbreak is a three-to-four hour long jailbreak for vamp- wait, vampires? Yes! Vampires. A party of four characters that are fifth level can play as vampires with fun new rules to customise your vampire.  Can the players scramble their wits and get through obstacles that are meant to prevent vampires from escaping? Even without equipment and with those pesky vampiric weaknesses?

Make Your Own Vampire

Turn into a bat, float inches off the ground, climb on walls, charm or frighten your foes, drain their psychic energy, or just go for the jugular with five movement and five offensive traits to mix and match from. Gone are the simple rules of a Strength, Dexterity, and Constitution increase and a Charm trait. Now you get to add a little flavour and diversity to your vampires!

With such reviews as, “this looks really fun!” and “you put two ‘the’s in a row”, you know the fun is going to come. Better yet, you can make these characters on custom vampire character sheets!

Making characters for a one shot can be a pain or time-consuming. Sometimes you just want to pick it up and play when your regular DM needs a vacation. You’re covered with four pre-generated characters. Escape the paladins with the lethal fighter Vladamir Stoivov, the stealthy shadow monk Sorina Lollinia, the haunted warlock Terenvour Pinnisol, and the necromancer Pavel Nadeka. A party of four unoptimised, yet flavourful, characters.

The prison, the guardhouse, and the cave all have maps (the cave has two!) that are gridded, ungridded, labelled, and not labelled! Lovingly crafted with no frustrations at all. Nope. But that’s 14 maps altogether!

Play It Your Way

Playing as vampires may allow a party to lean into their evil side a bit more! That’s okay, as long as everyone at the table agrees that it’s fun. You can make it as grimdark as you want. That said, that’s not the only way to play it! Feel free to ham it up as much as you want and embrace the silly side.

The First of Many?

Bats Outta Cell is the first of a planned series of one shots that allow the players to play as creatures from across the lore of D&D and more. Each will allow for fun options that will give your players a unique experience.

“I would give our run through 10/10. And it is definitely a unique idea to play as vampires”

“I also enjoyed how each room was so immersive and fun to interact with.”

SPOILER “The final fight against Hector was brutal and FULL of personality.”

SPOILER “I love the door puzzle, so many options to try” 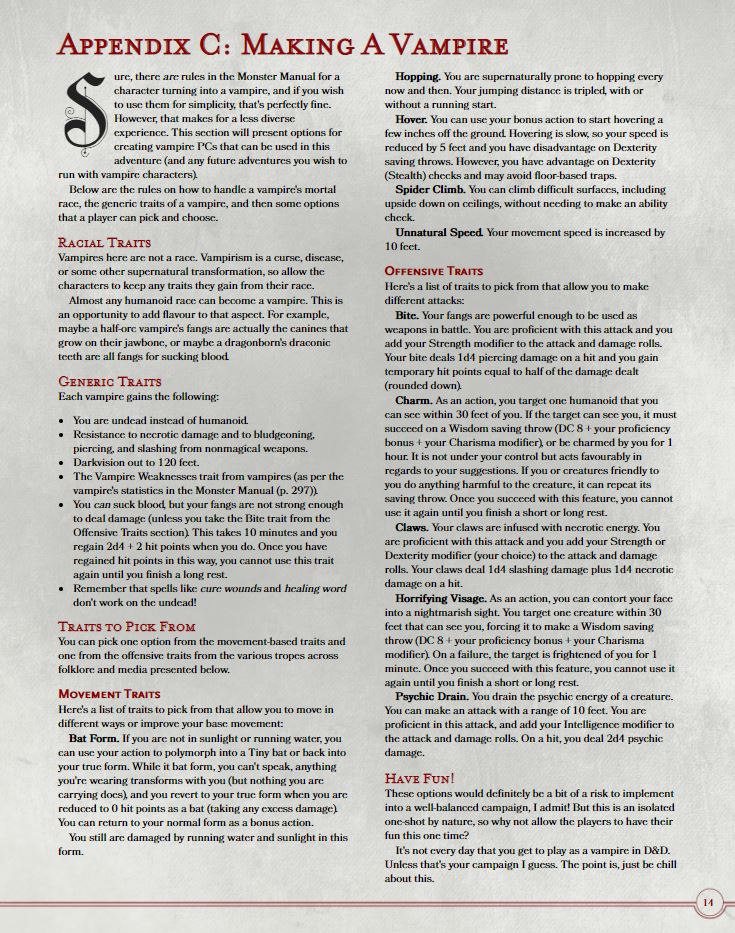